The different types of cavitation are represented by suitable mathematical models within the simulation framework DSHplus.

The content of this page can be viewed in Webinar form by clicking on the adjacent video.

Advantage of the DVCM: The only required input parameter is the temperature-dependent vapour pressure of the liquid!

The capability of a liquid to dissolve a gas is characterised through the Bunsen coefficient αB.

The Bunsen coefficient indicates how much gas volume Vdiss0 can be absorbed by a liquid volume VL at ambient pressure p0.

The capability to dissolve gases is pressure-dependent (Henry's law). For pressures p ≠ p0, the gas volume that can be dissolved is given by:

Hence, for a piston filled with hydraulic fluid and undissolved gas at ambient pressure, the volume VG of undissolved gas will decrease with increasing pressure, even if the gas were incompressible (see adjacent figure)!

If the mixture is compressed further, the gas fraction will be entirely dissolved above the pressure pα mentioned earlier:

However, the outlined behavior can only be observed for quasi-static (very slow) changes of the pressure. 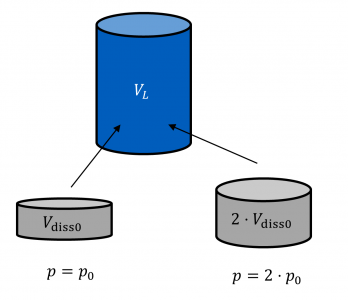 In case of rapid pressure changes, the finite absorption and desorption rates of the gas fractions must be taken into account!

The temporal absorption or desorption behaviour of the liquid-gas mixture is modelled as a 1st order lag element (PT1) at the internal grid points of the pipe.

The parameters of the absorption and desorption functions (time constants τAbs and τDes) are system specific and must be determined experimentally; the standard parameters of DSHplus provide a rough orientation if no values are known.

The effects of the time-dependent absorption or desorption are shown for exemplary selected parameters (τAbs =10 ms, τDes =1 ms) in the adjacent DSHplus screenshot.

It can be seen that (according to the parameterisation) the proportion of undissolved gas increases rapidly (desorption) when the pressure is lowered, but that the absorption of the gas back into the liquid occurs with a certain delay when the pressure rises again. 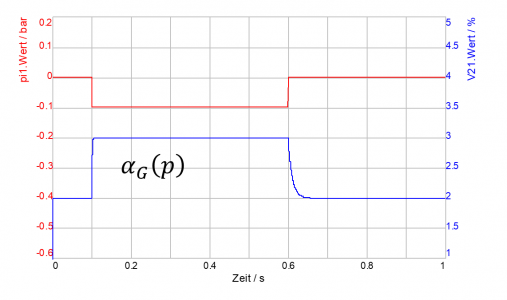 A homogenous mixture is assumed, thus dissolved and undissolved gas are transported with fluid velocity.

A control volume Vi corresponds to each grid point of the method of characteristics (MOC) grid.

The gas mass fraction (or the equivalent fraction of undissolved gas αG0 at reference pressure p0) at the new time step n + 1 is calculated from the incoming and outgoing mixture fluxes with their corresponding gas mass fractions.

Where gas bubbles occur, the properties of the hydraulic fluid (more precisely: the fluid-gas mixture) undergo significant changes. Since the gas phase can be compressed much more easily than the liquid phase, the stiffness of the mixture - characterised by the effective bulk modulus Keff or the effective speed of sound aeff - is significantly lower than that of the "pure" liquid.

The curves shown are only valid for slow processes. For highly dynamic processes (e.g. pressure surges), the frequency dependence of the gas bubble stiffness must also be taken into account. This can – depending on the frequency position – further reduce or even increase the stiffness of the mixture. 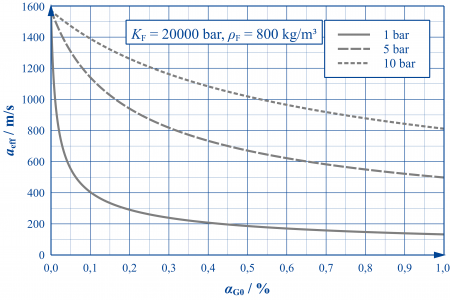 One could assume that the pressure difference across the resistance is the only parameter that determines the beginning and extent of cavitation. However, since – as shown in the adjacent figure – the occurrence of cavitation can be delayed by increasing the inlet pressure, this variable cannot be the only relevant parameter [1].

In practice, the combined effects of these two "set screws" are therefore determined by the cavitation index C (or its reciprocal value) [1]:

The measured values published by EBRAHIMI et al. can be reproduced in the 1D simulation with high accuracy by using a valve-specific typical value for Ckrit (dashed curves in the adjacent figure).

If cavitation occurs at a resistor and the liquid carries dissolved gas, a certain amount of the gas is released due to gas cavitation.

The amount of gas released by cavitation is described through the released gas fraction RGF, which is defined as follows:

If all the gas is released in the resistance, RGF takes on a value of one.

Since the relationship between the geometry of the resistor, the pressure drop and the amount of gas released is generally complex and situation-specific, the corresponding values must be determined either by experiment or through numerical 2D/3D simulation.

In order to enable a rough parameterisation – if no data is available – a pre-parameterised, semi-empirical model is available in DSHplus (see adjacent figure). 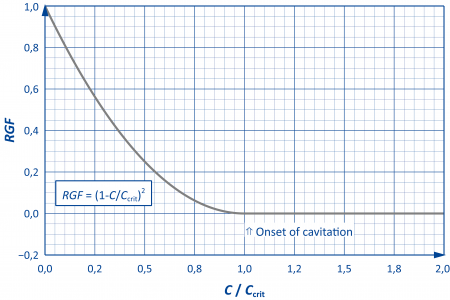 [1] EBRAHIMI, B. et al. „Characterization of high-pressure cavitating flow through a thick orifice plate in a pipe of constant cross section.“ International Journal of Thermal Sciences 114 (2017): 229-240.